A Giant Among Weeds

Dubbed as UK’s ‘most dangerous plant’, the non-native invasive (NNIS for short) Giant Hogweed certainly lives up to its name, growing 5-6m tall, towering over our native plants and severely injuring unsuspecting park-goers and outdoor lovers unfortunate enough to come across it. But where did it come from? How is it so harmful? And what can you do to protect yourself?

Giant Hogweed originated from Caucuses mountains and like many invasive species origin stories, was brought to the UK in 1817 from Russia as an ornament, truly demonstrating that “beauty is in the eye of the beholder”. However, its resilient seeds managed to escape and as a result, the plant has thrived in many of our habitats, riverbanks to parks, gardens and roadside verges, where it reaches its peak growth during June to August – perfect timing for sunshine enthusiasts.

The threatening appearance of Giant Hogweed is completely justified. It is covered in a phototoxic sap that has hospitalised both humans and pets with severe burns, painful blisters and even blindness should there be any exposure to the eyes! Even if you don’t show symptoms immediately, don’t think you’re off the hook. It can take 24-48 hours after contact for the plant’s cruel trick to take effect, which last up to several weeks before leaving its victims with scars that can last 7+ years. And if that wasn’t bad enough, once the blisters recede, the affected skin becomes more sensitive to sunlight. Clearly Giant Hogweed has a severe case of Haphephobia!

As with many ailments, prevention is the best cure. However, if your local park is swamped with reports of Giant Hogweed, it is only sensible to know your enemy to avoid interaction in the first place.

Despite being an invader of our island, it is from the carrot family where all of the species, including native, have the same white, umbrella-like flower heads that can often lead to mistaking it with some of its safer cousins such as Cow Parsley and Common Hogweed. Fortunately, its features are enough to trigger alarm bells to steer one out of harm’s way.

Key features consist of the following:

Although Common Hogweed and Cow Parsley have somewhat of a hairy stem, they lack the distinct purple blotches and jagged leaves. The former’s leaves have a rounder appearance as opposed to jagged and the latter are small, feathery and fern-like. Another pair of plants that are equally dangerous are Hemlock and Hemlock Water dropwort, where both have the feathery leaves of Cow Parsley but have thick, hairless stems. The former’s stem has the same purple blotch trait of Giant Hogweed. 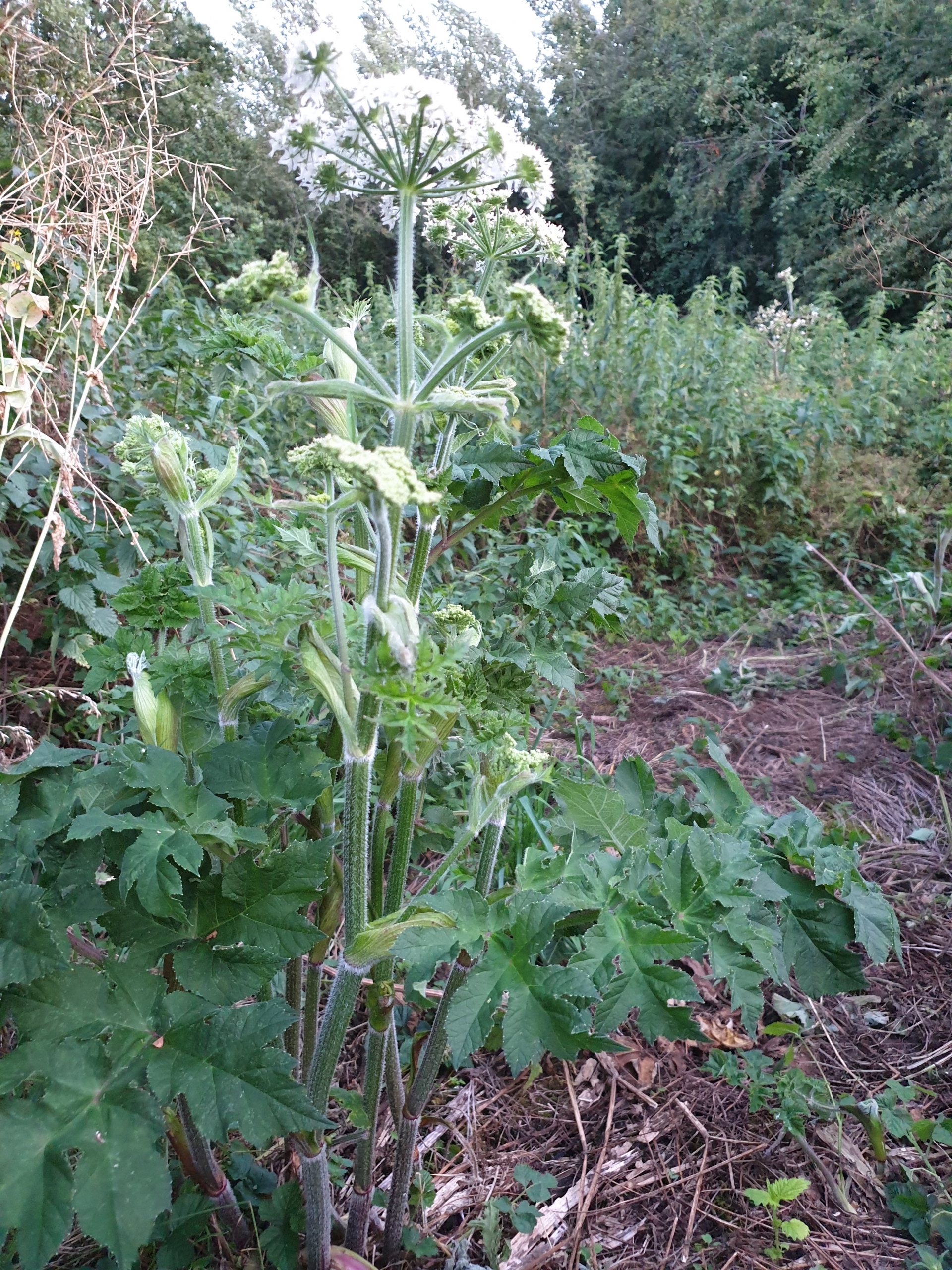 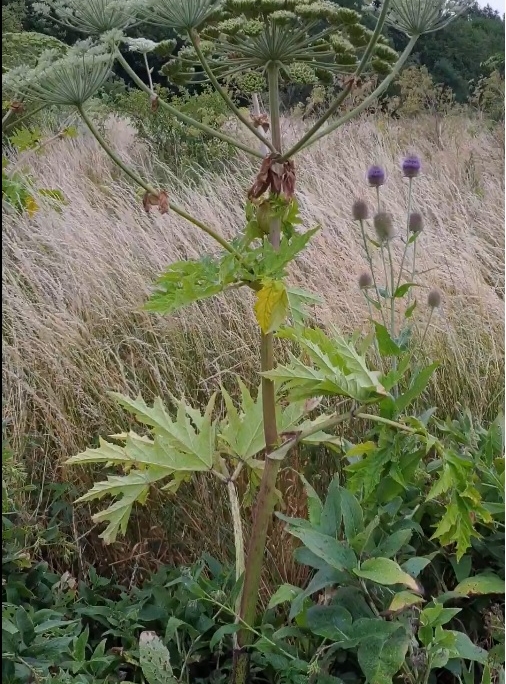 In short, steer clear from:

If you’re one of the poor, unfortunate souls that happen to brush against Giant Hogweed, or get their sap on your skin, don’t panic! You can greatly reduce the effects as long as you take the following three steps:

As the recent pandemic restrictions begin to ease, it’s only natural for people to flock to green spaces to catch up from their long-awaited time away with the British sunshine. Just keep an eye out – when in doubt, always keep a permanent social distance from Giant Hogweed to avoid brushing against their leaves and picking up any hitchhiking seeds clinging on to your clothes. If you want to help stop this public menace in its destructive tracks, you can report sightings to local park rangers or via the CVFC app. You can also help with volunteer surveys. For more information, check out the NNIS page.